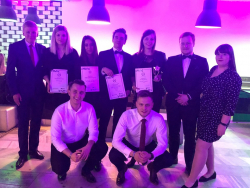 On 23-26.05.2019, representatives of our section went to Białystok to take part in the National Platform of ESN Poland. During the meeting plenary sessions, workshops and trainings for participants took place as well as debates on current topics. In addition, the new National Board and the Audit Committee of ESN Poland for 2019/2020 were elected.

On the last evening of National Platform, the Polish Stars Gala took place, during which ESN UEK won as many as three prizes:

In addition, we were also awarded for exemplary performance of the tasks for the Section towards the ESN Poland. Congratulations to everybody who contribuited to ESN UEK's success during this year's Gala!