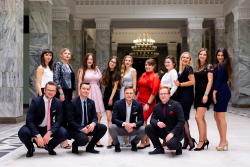 ESN UEK always puts much effort into organizing variety of projects and events for our international friends. They also try to help local students interested in mobility and to promote international exchanges among students society. But even if the organization’s calendar is filled to the brim, that’s not everything our volunteers do! ESN UEK Members are also involved in the activities of ESN Poland and support the national level of the Network.

Our Members are actively involved in Committees and Groups supporting ESN Poland. What is more, we are pleased to announce that one of our members - Radosław Łyko has been elected the President of ESN Poland, and Grzegorz Zamaryka from our section was the National Coordinator of ESNcard Project. Representatives of ESN UEK also participated in conferences and trainings organized by ESN Poland.

Where could you meet us during the past months?

On May 17-20th the National Platform took place in Warsaw. During the meeting important discussions about the future of the Erasmus Student Network took place, as well as elections of the new National Board. As a result of the voting, Radosław Łyko (ESN UEK) had been elected for the President of ESN Poland. However, this is not the end of our section's successes during the event. At the Stars Awards Gala, organized to celebrate 20th anniversary of ESN Poland, ESN UEK won the first place in the ‘Best PR activities in social media’ category. We received the award for the promotional campaign of the ESN UPGRADE Krakow 2017 training event.

On June 16-17th, PR Summit took place at the Politechnika Krakowska. 27 people from 18 sections took part in the event. The aim of the meeting was integration and development of people who are responsible for the public relations and promotions in the local sections of ESN Poland.

On September 8th, the Business and Finance Conference in Warsaw 2018 was held. The BFC is a conference during which members of the ESN Poland can participate in workshops helping to increase their knowledge of fundraising and finance.

HR Summit took place on September 22-23rd. It was a meeting organized by HR Committee of ESN Poland, during which people interested in the subjects of human resource management could gain new knowledge and motivation for their further actions.

On October 19th-21st, CLR Toruń 2018 took place. Council of Local Representatives is one of the statutory meetings of ESN Poland. During the event Delegates of all the Polish sections take part in the discussions as well as workshops called small sessions.

Nationwide Congress of Systematic Dialogue
On November 9-10th, several members of ESN UEK, together with representatives of other ESN Poland sections, took part in the Congress of Systematic Dialogue organized by the Polish Council of Youth Organizations (PROM). The aim of this event was to establish 100 postulates for the 100th anniversary of Poland regaining independence. The whole event was concluded with a banquet at the Palace of Culture and Science.

On November 10-11th, a meeting for the local Coordinators of SocialErasmus & ExchangeAbility projects took place. Their work focused on discussing the problems of local coordinators, the aim and the future of both projects.

The ESN UPGRADE Lublin 2018 was held on November 15-18th. ESN UPGRADE is a nationwide training of ESN Poland. In this semester it was organized by ESN LUT. Members of our section took part in the workshops on the paths of ‘PR/IT’, ‘Finance & Partners’ and ‘Management’.

National Platform Gdańsk 2018 took place on 30.11-02.12.2018. NP is one of the two most important statutory meetings of ESN Poland. During the congress, ESNers from all over Poland decided on the future of our Network. In addition to the discussion, the participants of the meeting took part in workshops called small sessions.

The DECOM - Discover Europe Coordinators Official Meeting was held on December 08-09th. The event was organized to discuss the activities of the local Discover Europe coordinators as well as to share ideas on the project development. It combined both - training for participants and time for integration.

Debate on student mobility in the Erasmus + Programme

On December 7th, representatives of our section took part in the debate with the National Agency of the Erasmus Program - Foundation for the Development of the Education System (FRSE). Radosław Łyko led the panel ‘How to effectively promote Erasmus+ mobility among students?’, While our Chair of the Audit Committee (Małgorzata Zator) and ESN UEK Delegate (Kamila Kosmala) conducted a presentation entitled ‘Accommodation in the place of studying/internship - is that really a problem?’. There were also Agnieszka Hydzik and Agata Delekta, who actively participated in the discussion!

This initiative aimed to integrate two big international organizations. On December 13-15th, participants representing ESN Poland and ELSA Poland, took part in workshops about Design Thinking, soft skills and many more. It was also an inspiring time of good practices exchange and getting to know each other better.