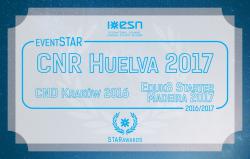 CND Krakow 2016 organized in December 2016 by the ESN UEK received the eventSTAR 2016/2017 award during AGM Berlin 2017.
STARawards granted to the best projects, events, sections, and countries of the ESN network, had been presented at the Annual General Meeting of Erasmus Student Network, the biggest and most important event in the ESN structure, this year taking place in Berlin.
Council of National Delegates Krakow 2016, the second most important ESN convention, organized by ESN UEK in December 2016, was awarded the second place in the eventSTAR category, granted to the best international events of the network.
During 3 days of plenaries, representatives from 39 countries discussed the activities of ESN International as a whole, current issues and also plans for the future of the entire network. One of the major decisions the CND had made was approving the establishment of ESN's 40th member country, Belarus.
ESN UEK wishes to thank the authorities of the Cracow University of Economics, the UEK Student Parliament, the Organizing Committee and all the volunteers for their hard work in preparing and helping to organize this event. Your work and commitment have been recognized internationally, resulting in the eventSTAR 2016/2017 award.
At this year's AGM Berlin 2017 ESN UEK won also another prize – STARlight.
More about STARawards:
https://issuu.com/esn.nec/docs/starawards_2016-2017_booklet