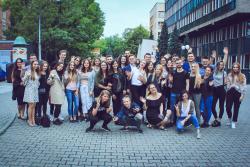 The ESN UEK section was established in 2003 thanks to the great effort of Ms. Katarzyna Urbaniec, that is currently an honorary member of the organization.

We are a local section, which is part of international organization ESN AISBL. It is one of the biggest organizations at Cracow University of Economics and in Cracow. Our ESN UEK is created by amazing, young people who are working everyday to make all Eramus and international students feel like they are at home. We have about 85 active members who are involved in groups such as PR, Social, Travel, Sport, Party and so on. Moreover our group Tour de Krakow is taking care of students who are coming to this beautiful city to spend „weekend of their lives”. Great project Erasmus Blog allows Erasmus students to share their stories with other students and encourage people to become part of this wonderful experience.

Main goal of our job is to be as the best host to Erasmus students as it is possible, integrate with them, help them with daily issues and show them Polish culture and traditions. Motto of ESN „Students helping students” is strongly performed in our section. Truth be told, we are for and because of Erasmus Students, and we are all creating ESN UEK.

In December 2013 and in March 2016 ESN UEK was announced ‘Section in the Spotlight’.

In 2005 together with other sections of Krakow we organized Annual General Meeting. In 2011 we decided to join our forces one more time which resulted with amazing Central European Platform. In 2014 we successfully hosted Council of National Representatives. In December 2016 we are organizing Council of National Delegates Krakow 2016.In November 2017 we were honored to organize UPGRADE Krakow 2017. To stay up to date follow our fanpage.